With some free time this week I wanted to work on something I’ve had my eye on for a little while.  I really like the idea of patterned cookies, like the ones made by LightBreak.  LightBreak’s own patterns are fairly pricey, so I thought I’d try making my own.

I first thought I’d use something like thin craft foam, it’s not expensive (I got a 36″ x 60″ roll from a hobby store for $8) but it would be difficult to make certain patterns, like branches, for example.  I thought that maybe I would cut out the shapes and glue them to clear plastic sheets, and then thought a better idea would be to just use black marker.  I think I’ll be using the black foam as flags, that’s something else I’ve been needing anyway.

Naomi had some scrap heavy plastic sheets I could use.  She purchased these also at a craft store a while back, so I don’t know how much it cost, or which store specifically.  While running errands yesterday she stopped in at Bates Art and Design and picked up a Pilot Super Color Marker.

I used a fine-tip Sharpie to create a 2.5″ grid, and then used the Pilot to create the thick lines: 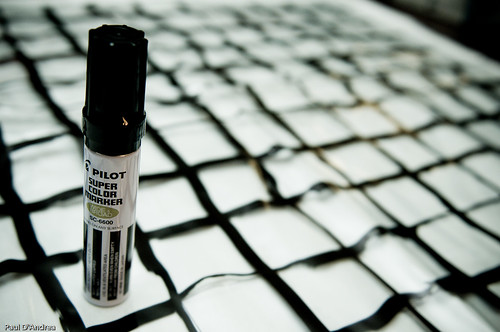 After some test shots I decided to thicken the lines more than they are in this photo.

Naomi is much better drawing freehand than I am, so she spent the evening making me a branches pattern.  I haven’t used that one yet, but it looks great.

About the lighting for Carmen’s photos, the background is a Speedlight shot through the grid cookie.  For Carmen, I first started with an Elinchrom Quadra into a 53″ Octobox front camera left, but it was spilling too much onto the background.  I swung it around, to light over her shoulder, and brought in a Lastolite 2 stop Trigrip to reflect in some fill.  It wasn’t enough, so I popped another Speedlight behind it to shoot through.

By Paul D'Andrea
Arts and Crafts